20 people dressed in the flags of the Debt20-countries, about 150 activists, many journalists and camera teams and – as expected – not one 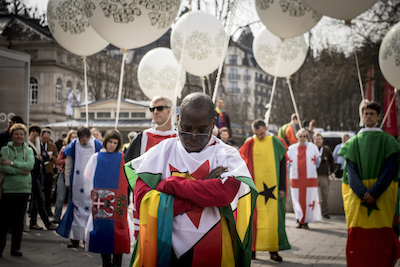 Jürgen Kaiser, who is the policy coordinator of Jubilee Germany, held a speech directly opposite the Baden-Baden “Kurhaus” where the G20-finance ministers met. He explained: „Credits and therefore debts are one of the most important elements of a capitalist economy. If everything goes well then both sides benefit from a credit. But if this is not the case then the investors release themselves from their responsibilities and the debtors are caught in a debt trap with no way out – even if they make great sacrifices.“

The public action organized by erlassjahr.de and ACK Baden-Baden demonstrated how over-indebtedness can suffocate poor countries. Helium balloons, which were imprinted with bank notes, hung around the necks of 20 activists dressed in the flags of the Debt20-countries.

Dr. Fanwell Bokosi from the African debt relief network AFRODAD and the Ecuadorian economist Alberto Acosta represented the Debt20-Group. Bokosi said: „The G20 talks a lot about stability and resilience but at the same time they support the extension of credits in African countries, which are rich in natural resources. Many of those credits are lucrative for multinational companies but in the end, it’s the citizens that bear the cost of the redemption.“ Acosta, who some years ago was a minister in Ecuador himself, wants to know from his ex-colleague Schäuble why Greece can’t get the same treatment that Germany received in the early fifties. At that time, Germany was able to stabilize its economy as a result of a comprehensive debt relief.

In the run-up to the event, Jubilee Germany had invited the finance ministers to symbolically cut the debt. As expected, not one of them showed up. Therefore, the activist had to perform the symbolical cut for highly indebted countries themselves. Immediately after, the activist came together at a nearby church, where the regional cooperation partners presented themselves and their work. Visitors had the possibility to get into conversation with Dr. Fanwell Bokosi and Alberto Acosta. Furthermore, the exhibition „Voices of the Debt20“ displayed what people from indebted countries have to say.

The day of action ended with an ecumenical service. Archbishop Stephan Burger and Protestant regional bishop Jochen Cornelius- Bundschuh, who both gave a sermon at the well-attended church service, argued in support of a debt relief.

Video: Debt20-Day of Action For Debt Relief in Baden-baden