The global debt crisis is gripping more and more countries in the Global South. It is threatening the livelihoods of millions of people. At the same time, many over-indebted countries are suffering massively from the impacts of climate change. Bone crushing debt servicing is hampering urgently needed adaptation measures. 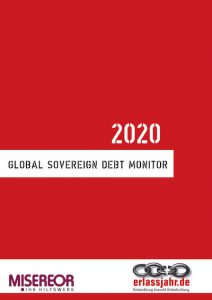 Countries in default: 19 governments have currently had to suspend, either in full or partly, payments to their foreign creditors.

Risk factors raising the threat of indebtedness: The difference between the low interest rates in the North and the high profits in the South continues to fuel capital export. A high demand for infrastructure in the South, dependence on a small number of commodities for export and weak governance in some countries of the South are amplifying the tendency towards unsustainable indebtedness.

Climate change is aggravating the debt crisis: Climate change and the disasters it triggers are becoming increasingly severe and often present a special threat to highly indebted countries. Small island nations in the Pacific and the Caribbean as well as the countries in the Sahel Zone are particularly hard hit. An agreement on compensation provided for victims of climate change by its perpetrators has still not been reached.

Debt relief mechanisms are lacking: No internationally coordinated mechanism on coping with recent debt crises is in place. This leads to a prolongation of debt crises. People in the countries affected are bearing the costs.

China and other “non-traditional creditors”: In order to be able to cope with a debt crisis, the creditors have to negotiate with one another and with the debtor. In the current debt crisis, increasing private loan making and the status of China, which has become the most important creditor for many debtor countries, are complicating coordination.