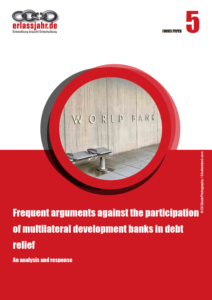 Since April 2020, the members of the G20 and the Paris Club have granted up to 73 of the poorest countries a debt moratorium aimed at creating fiscal scope to facilitate combating the COVID-19 pandemic. Since November 2020, a debate has been ongoing over whether to grant real debt relief under the Common Framework for Debt Treatments beyond the DSSI – extending over and above the moratorium provided under the Debt Service Suspension Initiative (DSSI). One of the decisive questions over the future of such debt relief is whether all creditors, and not just the few that are willing, will join in such a move.

In this context, one vital group alongside the private creditors who, to date, have not been compelled to participate, consists of the multilateral financial institutions. In debt relief workout mechanisms so far, these institutions have claimed so-called ‘Preferred Creditor Status’. On this basis, they are demanding preferential servicing of their claims and thus exclusion from debt restructuring arrangements. However, civil society in both creditor and debtor countries argues that, with any debt restructuring arrangement, not just a few but indeed all creditors must be included.

This is being met with objections from the multilateral development banks primarily on the grounds that their financial integrity is ultimately in the interests of potential sovereign recipients of debt relief, since the latter are dependent on secure financing at favourable interest rates for as long as they are not able to obtain finance at acceptable terms on the private capital markets. The analysis initially considers in more detail the particular characteristics of multilateral creditors as a whole. We shall then look into the question of how cogent the argumentation in favour of excluding this group from debt relief actually is.